One (or several) cobalt bomb(s) is a possible doomsday-weapon. Its an ordinary nuclear weapon, with a admixture of Cobalt-59. Co-59 is not radioactive itself, but the nuclear device sends out a lot of neutrons wich is absorbed by the Cobalt, and turn it into Co-60 wich is very radioactive. It has a half-life of 5,7 years.

The radioactive Cobalt-60 can be spread over large areas and contaminate the surrounding things, plants, humans and animals. As little as 1 gram Co-60 can contaminate one squarekilometer, so it will be uninhabetable. The Cobalt will waporize in a nuclear explosion, then condense to solid form, in form of dust.

The cobalt bomb occurs in at least two movies, the most famous is;
"Dr. Strangelove or: How I Learned to Stop Worrying and Love the Bomb", the other is "On the Beach". It's also named in the James Bond-movie Goldfinger, where the bad guy has plans a little, but dirty bomb in Fort Knox to contaminate the Gold, with "Cobalt and Iodine".

Newly manufactured Co-60 has an activity at 10 Sv at a hypotetical detonation fallout. Lethal dose is in 30 minutes is about 5 Sv. It takes 142 years (27 half-lives) to the Cobalt (wich has decade to Nickel) to be safe.

There is no evidence that a country has manufactured cobalt bombs. In a hypotetical bomb, for examle, the tamper can be made of Co-59.

A thermonuclear bomb is based on fusion of atoms. Light atoms is smashed together. The most common is Deuterium (heavy hydrogen) and Tritium (radioactive hydrogen). When they are fusioned it realese a massive energy. 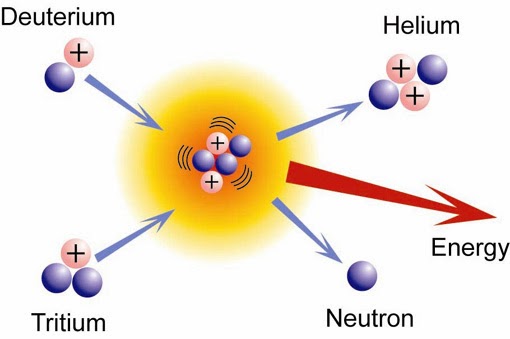 To start the fusion, it requires a lot of energy. A fission bomb is used as a "detonater". Here is a simple drawing of a fusion bomb. 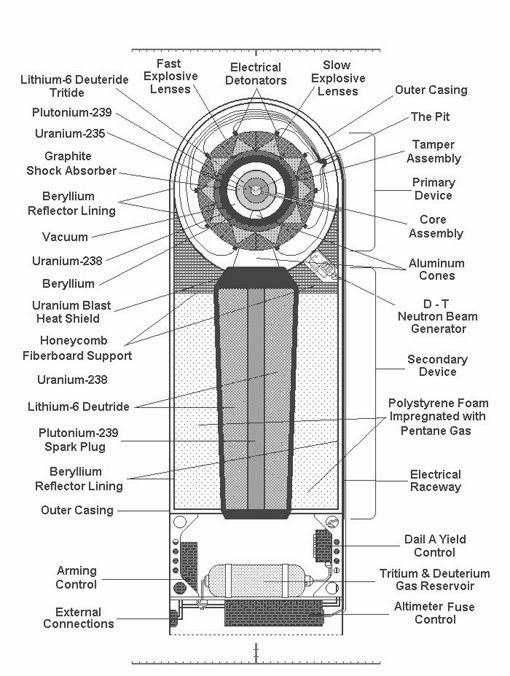 The upper part is the fission-device, which triggs the fusion-part. Theoretical a thermonuclear bomb can be as big as preferably. A common warhead is W88, used in the SLBM (Submarine Launched Ballistic Missile). It has a yield around 475 kt.

The biggest bomb ever detonated is "Tsar Bomba", which yield was about 50 Mt. Is was tested by the Soviet Union 1961. The biggest bomb tested by USA was Castle Bravo with a yield of 15 Mt. Se more att wikipedia; http://en.wikipedia.org/wiki/Nuclear_weapon_yield The "Tsar Bomba" was first designed to be 100 Mt, if the outer shell was made of Uraniun, so it would be as fission-fusion-fission. But that had causted a large amount of radioactive fallout. So the shell was made of Lead.

ICBM (InterContinental Ballistic Missile) is plased in missile-silos or on a wehicle. Russia has Missiles in the megaton class, USA has Minuteman III, which has been dismantled to one warhead. But the submarines has up to 8 warheads in one missile. Se the list of weapons;
http://en.wikipedia.org/wiki/List_of_nuclear_weapons 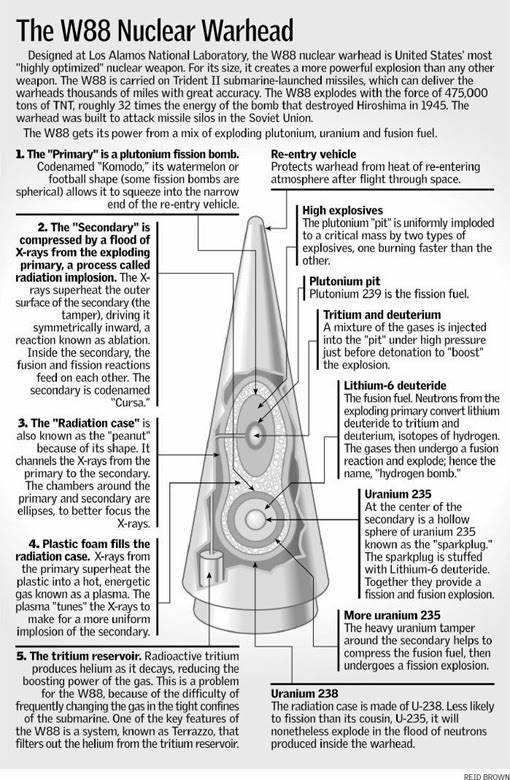 Nuclear fission bombs are based on Uranium-235 or Plutonium-239. At least one test has also been tested with Uranium-233. It is also possible to build nuclear bombs with Neptunium or Americium. It is a pretty simply comstruction. But the types are different depending on using U-235 or Pu-239. A U-235 is the easiest to build.

Here is a drawing of the Uranium bomb "Little Boy" which was dropped on Hiroshima. 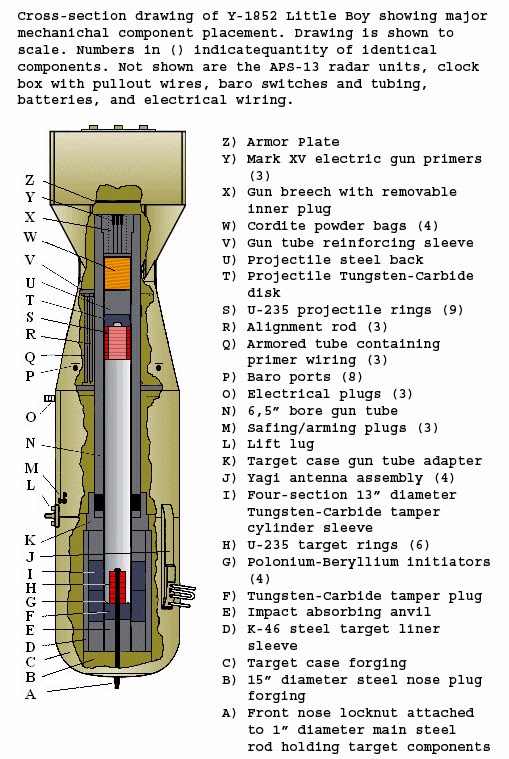 A Plutonium bomb is more complicated, it is built on a implosion of a Plutonium-sphere. But you will only be need of about 6 kg of Plutonium. Plutonium does not exist in the natur (exept for small traces), so it must be made in a reactor. The Plutonium is often alloyed with about 3 % Gallium.

Here is a drawing of the Plutonium bomb "Fat Man" which was dropped on Nagasaki. 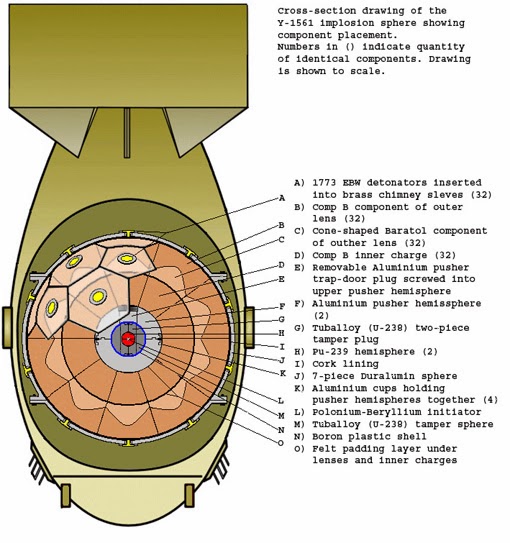 The hard thing with this device is to get the explosive lenses to detonate exactly at the same time.

In both cases, the device is build to smash together a fissile material into a critical mass, with help of conventional explosives. Little Boy had a yield of about 15 kt, and Fat Man about 21 kt.
Upplagd av Richard kl. 13:51 40 kommentarer: